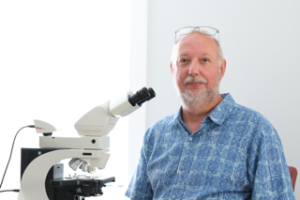 Dr. Gerard H. Jansen was trained as medical doctor and neuropathologist in the Netherlands, and has been working and living in Ottawa, after his immigration to Canada 20 years ago.

By day he is a regular hospital neuropathologist, mostly involved with brain tumours, muscle and nerve biopsies, and hospital and occasional forensic autopsy neuropathology. By night he is a warrior in Creutzfeldt-Jakob disease. He has been in a leading role in national CJD surveillances for 31 years in the Netherlands, Belgium, and Canada.

He has been involved with CJD clinically, making surveillance diagnoses in over 2,000 cases of suspected CJD, and also as national reference neuropathologist (over 1,500 of suspected CJD cases). Given his expertise he is consulted also in accidental laboratory and clinical/iatrogenic CJD exposures.

Gerard is (co-)author of over 150 papers, and many presentations on the subject of CJD. The last 3 years he was instrumental in bringing the truth to the surface surrounding the New Brunswick cluster of Neurological Syndrome of Unknown Cause.

When Gerard is not busy professionally, he likes to cook and also enjoys hard-labor renovating his house.