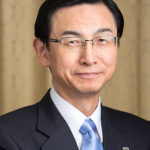 Dr. Hidehiro Mizusawa is President of National Center of Neurology and Psychiatry since April 2016 after 2 years of Director General, National Center Hospital of the institute.

He graduated with MD in 1976 from Faculty of Medicine of Tokyo University, where he received PhD in 1983. He moved to Tsukuba University as Assistant Professor in 1984 and became Associate Professor of Department of Neurology in 1988.

He has contributed particularly to researches on pathogeneses of ALS, Pure Akinesia/PSP, SCA, mitochondrial neuropathy, distal myopathy and Prion disease.

He has long been Chairpersons of Research Committees on Prion disease, Ministry of Health, Welfare and Labor, Japan (2002 – 2011) and on Surveillance and Control of Prion Disease and Surveillance (2010 – 2020).

He has been core members of Research Committees on Neurodegenerative Diseases and on Ataxic Disorders of which he was appointed as Chairperson (2014 – 2020).

He has been also a member of Advisory Board of National SCA/MSA Patients’ Association. Regarding the Initiative on Rare and Undiagnosed Disease, he has been the PI since 2015.